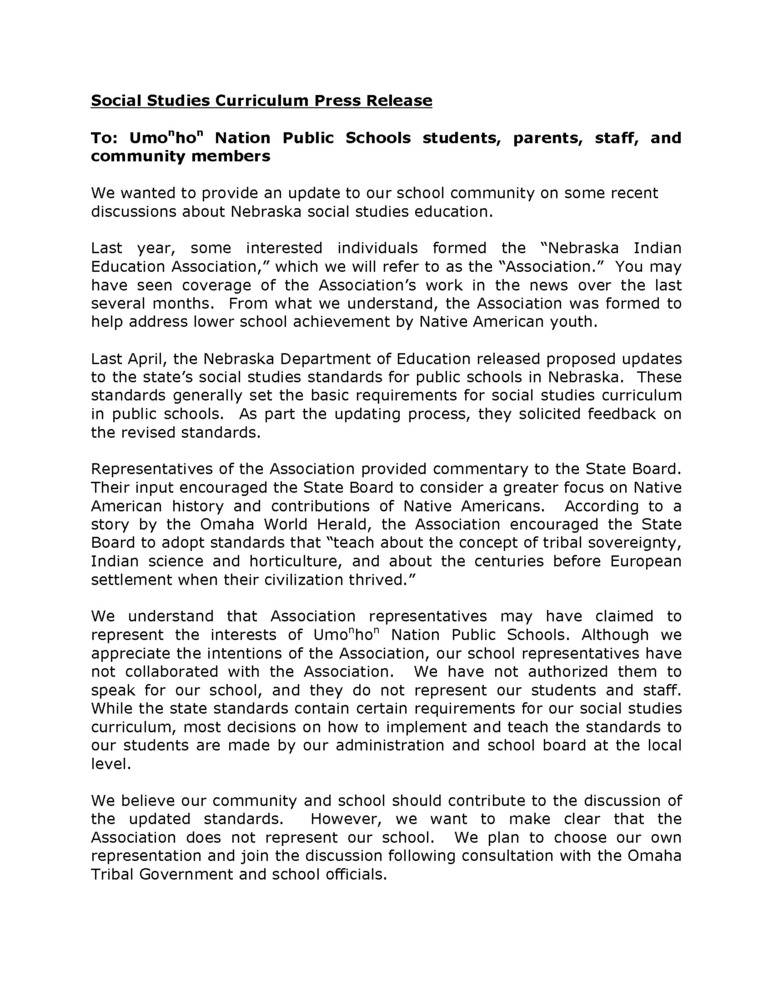 We wanted to provide an update to our school community on some recent discussions about Nebraska social studies education.

Last   year,   some   interested   individuals   formed   the   “Nebraska   Indian Education
Association,” which we will refer to as the “Association.”  You may have  seen  coverage  of  the Association’s  work  in  the  news  over  the  last several months.   From what we understand, the Association was formed to help address lower school achievement by Native American youth.

Last April, the Nebraska Department of Education released proposed updates to the state’s social studies standards for public schools in Nebraska.  These standards generally set the basic requirements for social studies curriculum in public schools.   As part the updating process, they solicited feedback on the revised standards.

Representatives of the Association provided commentary to the State Board. Their input encouraged the State Board to consider a greater focus on Native American  history  and  contributions  of  Native  Americans.    According  to  a story  by  the  Omaha  World  Herald,  the  Association
encouraged  the  State Board to adopt standards that “teach about the concept of tribal
sovereignty, Indian  science  and  horticulture,  and  about  the  centuries  before  European
settlement when their civilization thrived.”

We  understand  that  Association  representatives  may  have  claimed  to represent  the
interests  of  Umonhon  Nation  Public  Schools.  Although  we appreciate the intentions of the Association, our school representatives have not  collaborated  with  the  Association.    We  have not  authorized  them  to speak  for  our  school,  and  they  do  not  represent  our  students and  staff. While the state standards contain certain requirements for our social studies curriculum, most decisions on how to implement and teach the standards to our students are made by our administration and school board at the local level.

We believe our community and school should contribute to the discussion of the  updated  standards.However,  we  want  to  make  clear  that  the Association  does  not  represent  our  school.  We  plan  to  choose  our  own representation and join the discussion following consultation with the Omaha Tribal Government and school officials.