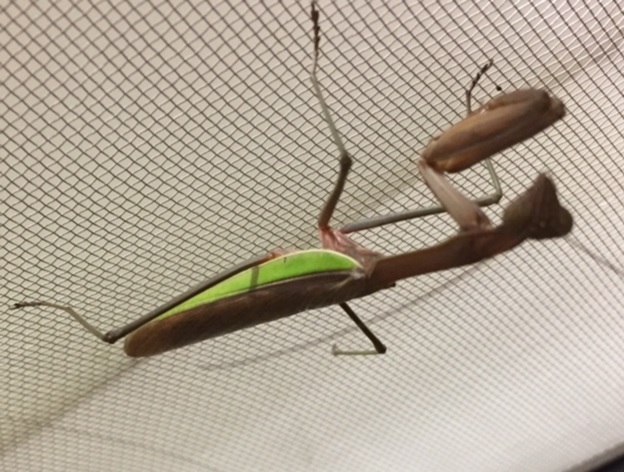 What is happening in Middle School?

Ms. Kneifl’s classroom has a special pet. They have a praying mantis. This is the third one that they have kept in Ms. Kneifl’s classroom. These insects get their name because they have very long front legs that they hold in a position that reminds people of praying. There are about 1,800 species of praying mantis around the world. Since praying mantis are carnivores, eating mainly insects and other small animals, you will see Middle School students and Ms. Kneifl, around the school, catching grasshoppers and crickets for it to eat. Many gardeners and farmers welcome mantis, because the insects they eat are often pests that hurt crops. In addition to insects such as crickets and grasshoppers, mantis eat spiders, frogs, lizards, and even small birds. Praying mantis have long necks topped by a triangular head. They can turn their heads 180 degrees, that’s an entire half circle. They have amazing body shapes that make them look like leaves or branches. Their front legs have rows of sharp spines to help them hold on to their prey, which they usually begin to eat head first! Students are busy trying to determine if this mantis is a male or female. The information book in the classroom states that in the fall, it is easy to determine the mantis sex. The female’s abdomen has become so large with eggs. The male remains very thin. Ms. Kneifl has had two previous mantis lay their eggs in the cage before they died, which is common. Students learned that the mantis will lay eggs even if they have not been fertilized. 8th graders that were in the 6th grade with Ms. Kneifl kept the eggs in the refrigerator over the winter and removed them to see if they would hatch in the spring, just as they would in the wild.